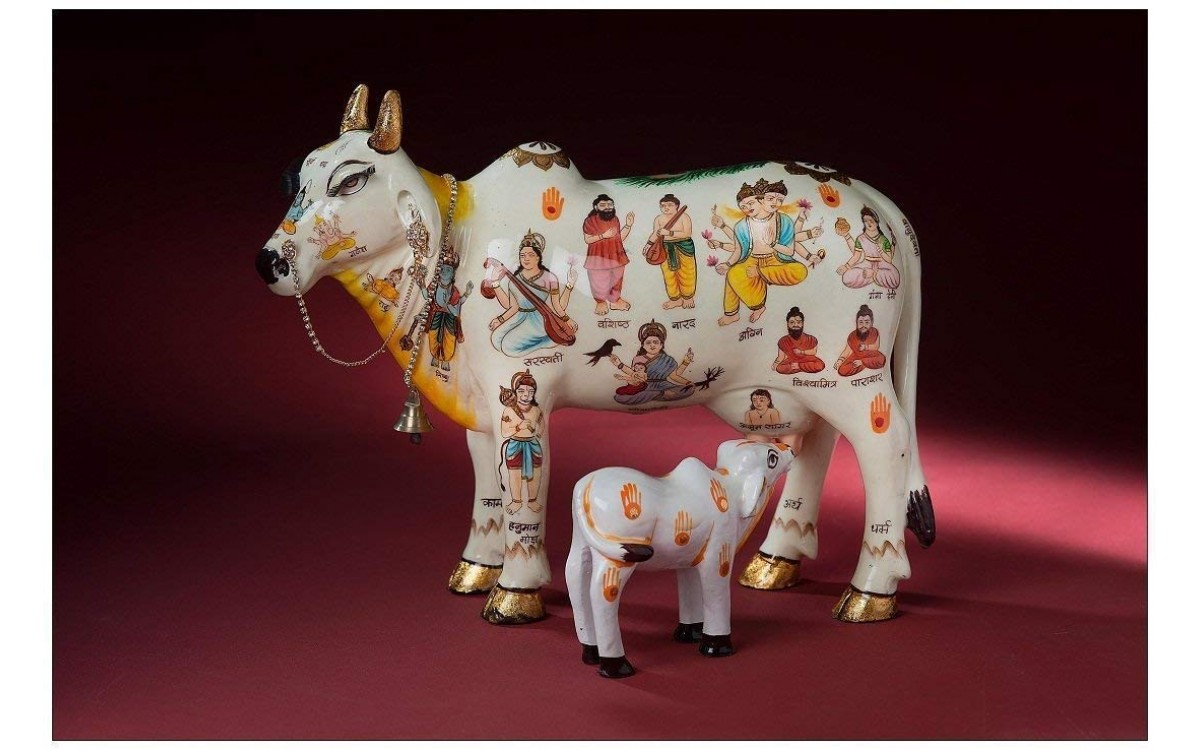 Hinduism considers the "Gomata" or the cow as an utmost sacred symbol. Hindus from all parts of the country, belonging to all cultures and languages, believe in the worship of the cow. This is due to the fact that Hindus consider all cows as aspects of Mother Kamadhenu.

The name Kamadhenu came from the Sanskrit root, "Kamaduha", which literally means, "the cow of plenty" and "the one through whom all desires are fulfilled".

Kamadhenu is worshipped as the divine wish-fulfilling cow goddess, according to Hindu mythology. She is considered as the mother of all cows, as also of the eleven Rudras. This sacred, miraculous cow provides her owner anything at all that he or she ever desires.

Kamadhenu is referred to as Surabhi, which, loosely translated means "the Fragrant One". It could also mean the one with the pleasing, soothing smell. Generally, it could refer to the typical smell that cows emanate.

This deity is also sometimes referred to as Matrika, the Mother or the one who sets an Example.

Her other names include Sabala (the Spotted One) and Kapila (the Red One).Birth of and Stories Relating to Kamadhenu

There is no specific record about the birth of Kamadhenu. Different scriptures provide diverse versions of this phenomenon. However, it is vastly believed that the Divine Cow, Surabhi, emerged from the Samudra Manthan episode - during the time when the Milky Ocean was being churned. Hence, she is considered to be the offspring of the Devatas and the Asuras. She was then gifted to the Saptarishis, the great Sages. Brahma ordained that she should supply milk and ghee, to be used for sacred Yagnas (sacrificial rituals).

The Anushasana Parva states that Kamadhenu was the daughter of Daksha, the God who created the world. According to this, Surabhi was brought forth from the belch of Prajapati (the Creator) Daksha, after he drank the Amrita (Nectar of Immortality), which came forth from the Samudra Manthan. In due course of time, Surabhi gave birth to several golden cows, called Kapila cows. These cows were also regarded as the mothers of the world. Some versions narrate that Lord Brahma drank a bit too much of the Amrita and ended up vomiting a bit of it. Surabhi emerged from this nectarine fluid.

Yet other scriptures claim that either or both the sages Jamadagni and Vasishtha kept the cow with them, in their hermitage, for a period of time. During this time, there were kings who tried to steal her from the sages and were severely punished for their acts, by Kamadhenu herself. In this version, Kamadhenu played an important role in the hermitage, providing milk and milk products for the sage. She also had the powers to produce fierce warriors to protect him.

In the Mahabharata and the Devi Bhagavata Purana, the cow, Nandini, is also referred to as Kamadhenu and is sometimes considered to be synonymous with Kamadhenu. At other times, Nandini is sometimes referred to as the daughter of Surabhi-Kamadhenu. According to Raghuvamsa of Kalidasa, king Dilip, an ancestor of Lord Rama, once failed to pay his respects to Kamadhenu when he happened to meet her. Angered, she cursed him that he would go childless all his life. Dilip's guru, sage Vasishtha, asked him to propitiate Nandini, Kamadhenu's daughter. Accordingly, Dilip and his wife served Nandini, who nullified her mother's curse and blessed them with a son, Raghu.

According to the Devi Bhagavata Purana, Krishna and Radha were enjoying each other's company one day, when they felt thirsty. Krishna created a cow, Surabhi and a calf, Manoratha, from the left side of his body. He then milked the cow, transferred it to a pot and proceeded to drink it. However, the pot fell to the ground and broke, spilling all the milk onto the ground. This milk became the Kshirasagara, the Ocean of Milk. Several cows miraculously emerged forth from Surabhi. Krishna gifted these cows to the Gopas, his shepherd-friends. Then, worshipping Surabhi, Krishna ordained that she would henceforth be considered the symbol of prosperity and would be worshipped on the occasion of Diwali.

Kamadhenu is believed to be dwelling in Goloka (the realm of cows) and also Patala (the Netherworld).

Kamadhenu is usually portrayed with the body of a cow and a female head, also with breasts. Sometimes, she is also shown as a spotlessly white cow, containing several deities within her physical structure.

Kamadhenu is regarded by Hindus as the source of all prosperity; verily as the Devi herself. She is also related to Prithvi or Mother Earth, who incidentally, is sometimes also described as the serene, all-enduring cow. To Hindus, the cow also represents purity, fertility, the ability to sustain human life and a selfless, sacrificing nature.

The four legs of the Kamadhenu embody the four Vedas and are considered to be as strong and enduring as the Himalayas. Her horns symbolize the Divine Trinity of Brahma at the tip, Vishnu in the middle part and Shiva at the base of the horn. In her eyes reside the sun and moon Gods. Agni, the God of Fire, and Vayu, the God of Wind, reside in her shoulders. In general, it is believed that all the major deities exist within the person of Kamadhenu. This is also how Kamadhenu is usually represented in portraits.

Another representation of Kamadhenu, which is slightly rarer, is that of a white Zebu cow. This version of Kamadhenu includes a woman's head, adorned with a crown; impressive-looking eagle wings and a peacock's tail. She is portrayed in this form in contemporary art.

Lord Dattatreya is commonly depicted being accompanied by a cow, which is often identified with Kamadhenu. Sometimes, Dattatreya is shown holding the Divine Cow in one of his hands.

Kamadhenu is closely related with Brahminism, as against dogs, which are given a non-Brahminical aspect. She also embodies the Pancha Bhoota or the Five Elements.

What is the importance of indigenous cows?
Desi Cows have been a piece of Indian way of life since ages obscure. It has helped humanity in ranches to furrow, on streets to convey loads, at home...
Reasons to Switch to Cow Dung Dhoop Sticks
We offer authentic cow dung dhoop sticks at great prices. Visit us today to check out available fragrances and reap the numerous health benefits. Shop... 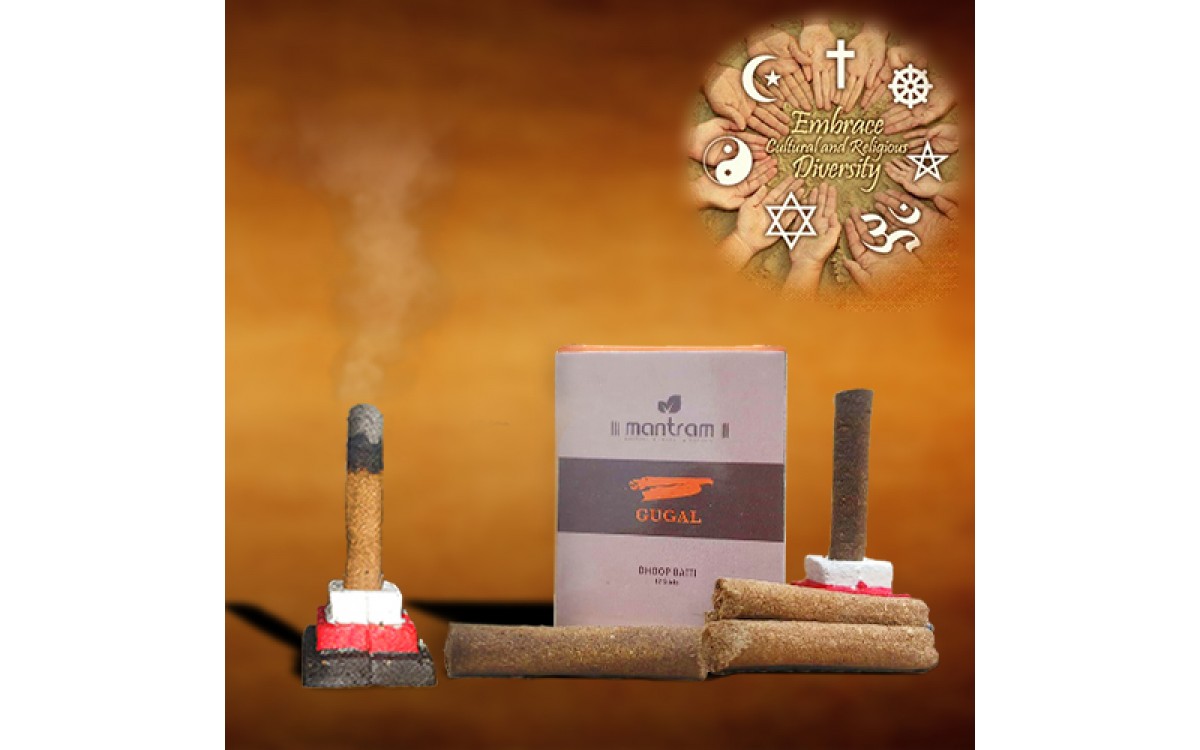